The Witch of Aeaea Necklace is not for the lightly jeweled. This is a ceremonial neck adornment made during the New Moon cycle with white willow bark, cypress, frankincense, myrrh, storax, cedar, orange peel, and quartz granules. Available in Quartz or Sunstone. An ancient design modernized in steel. The image is of Circe with her lions, casting spells out to sea. Circe used her solitude to discover herself. To practice and hone her craft. No outside disruption. Sometimes the world can form us, that’s what it was doing to her. Until she found herself through solitude. A reminder that only you know who you are and what you can do. Circe while conjuring, hand-carved into the wax mold in the old way to concrete its symbolic meaning. An ode in the form of steel to the goddess of old incarnated into the woman of new; the wearer.  Solid steel, weighted, statement. Limited. 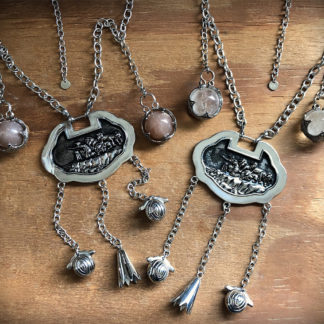